Disney’s High School Musical 2 knows its audience and plays directly to it. Opening night, the crowd was dominated by the under 12 set and they were there to be entertained.  As soon as the lights dimmed in the theatre, a wave of pint-sized shushing rippled through the room; this audience didn’t want to miss a single moment of the performance.

Judging by the enthusiastic applause, URP pulled it off.  URP mounted the original HSM two seasons ago with great success, so the sequel was a no-brainer. 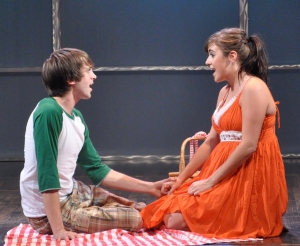 The first HSM revolved around the Disney-esque premise that everyone should follow their dreams and that people can be whatever they want to be.  HSM 2 also promises a kid and parent-friendly evening, complete with feel-good positive messages around loyalty and hard work.

The sequel follows Troy Bolton and Gabriella Marquez and their Wildcat compatriots as they spend their summer before senior year working at country club.  Scott Perrie (Les Misérables, Arts Club) and Shannon Adams as Troy and Gabriella respectively, had a very fitting G-rated kind of chemistry.

Though I spotted several twenty-somethings trying to pass as teenagers, there were also quite a few actual teens in the cast.  URP and their HSM and HSM 2 productions have provided a great opportunity for younger actors to gain stage experience.

Julie Trepanier was a somewhat subdued Sharpay Evans.  Trepanier certainly looked the part, but I found myself wishing that she’d have more fun with the role.

My only real quibble with casting was with Brandyn Eddy as Sharpay’s nicer twin, Ryan.  In Eddy’s hands, the nattily-dressed Ryan came off as more of a senior citizen than a high school senior.  Eddy is a more-than-capable actor, as evidenced by his turn as Seymour in last year’s URP production of Little Shop of Horrors.  But here, he just felt jarringly out of place.

Overall, the show accomplished what it set out to do.  The cast had fun, the parents had fun, and most importantly, the toughest critics of all, the kids, had fun.  What more could you ask for?

High School Musical was such a success for URP back in 2007 and 2008 that they’re mounting the sequel to the massive Disney hit for their 15th season.  HSM and its two sequels have a huge following among tweens, teens and Disney fans of all ages, which should bode well for URP’s ticket sales.

The cast of URP's 2009 production of High School Musical 2