The Firehall starts its 27th season with Back to You – the Life and Music of Lucille Starr.  Presented by Musical Theatreworks and written by Tracey Power (The Jungle Book), Back to You stars Beverley Elliott, Alison MacDonald (Songs for A New World, Not Another Musical Co-op) and Jeff Gladstone. 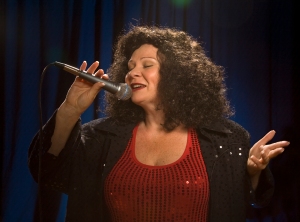 The musical journey of Back to You begins in 1981. Lucille Starr has come home to Coquitlam, BC to give her first solo concert in 25 years. It’s her comeback tour, in more ways than one and her nerves have peaked. The last time her hometown crowd saw her on stage, it was with their other hometown sweetheart, Bob Regan. Coming home has stirred up a lifetime of memories – from the duo’s rise in the country-music charts, her legendary solo career and international acclaim, to the loss of her voice and lengthy recovery.  Now here she is, the first night of her comeback tour, a tour that ultimately brings her back to her music, back to herself and back to you.

Directed by Barbara Tomasic, musical direction by Steve Charles, set and lighting design by April Viczko, and costumes by Barbara Clayden, Back to You plays from September 30- October 10, 2009 at the Firehall Arts Centre, 280 East Cordova St.  Tickets are available by calling the box office at 604-689-0926.