I know that I’d promised you my updated take on Altar Boyz last week, but I didn’t get a chance to see it again at the Granville Island Stage until this weekend.

The show has definitely accrued more polish, since when I first saw it in previews.  My original concern about missed comedic timing and line deliveries has been completely rectified.

All of the actors have settled comfortably into their roles, and are pitch-perfect, dancing machines.

David Hurwitz plays it up for laughs as the closeted Catholic Mark and balances the fine line between character and caricature.  I’m rarely comfortable with the fallback of using gays or other minorities as comic relief, but Hurwitz carries it off smoothly.  Hurwitz’s “Epiphany” had the audience cheering and I especially appreciated his over the top boy band style riffs. 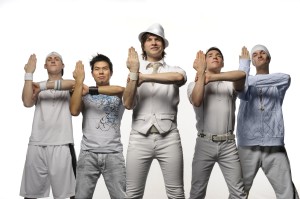 Jeremy Crittenden (Matthew), Jak Barradell (Luke), and Geoff Stevens (Abraham) each have multiple shining moments.  Crittenden has the classic boy band idol look and plenty of onstage charisma to back it up.  His rendition of “Something About You” is a guaranteed charmer.

Barradell gives a solid performance and really shows off in his solo in “Body, Mind & Soul!”

Stevens’ “I Believe” solo is crystal clear in its simple melody and sets the stage for the inevitable happy ending.

Originally I highlighted Vincent Tong, and once again I have nothing but praise for his performance as Juan.  “La Vida Eternal” both pokes fun at the short-lived Ricky Martin and Enrique Iglesias Latin music trend and shows off Tong’s vocals and strong dance moves.

Whether you loved them or hated them, 90s boy bands were ubiquitous for a reason.  Yes, they were attractive to the tween and teen set and their in-formation dance steps set many a straight female and gay male fan heart aflutter.  But the icing on the carefully pre-packaged cake was the infectious music and the catchy hooks.

If comparing the Altar Boyz as a musical against standard Broadway (classic or modern), the show doesn’t really have a prayer.  No one’s going to mistake the score for Sondheim.  But as a spoof of the boy band phenomenon, the score achieves the intent of composers Gary Adler and Michael Patrick Walker.  Adler and Walker have crafted a score that could have easily topped the pop charts a decade ago (minus the humor-laden lyrics).

In that regard Altar Boyz hits its mark.  The songs seem to be staying with me, whether I want them to or not.

The show’s book is practically non-existent; a Christian boy band attempting to cleanse the souls of every audience member before their concert is done.  The barely-there plot really doesn’t matter though, as the show consistently entertains with strong laughs, high energy vocals and  smooth dance moves.

A big part of the show’s success should be attributed to the four-piece band under Musical Director Sasha Niechoda.  Much of the show’s energy comes directly from the live music.

Sara-Jeanne Hosie’s choreography is even sharper than before if possible.  There’s really no excuse to miss this show, if you haven’t already seen it.  The Arts Club has set itself a high bar to pass for next season’s musicals.  But, if past experience is any indication, they’ll do it with flying colours.

Running at 90 minutes with no intermission, Altar Boyz runs until August 1st at the Granville Island Stage (1585 Johnston Street) in Vancouver.

The Arts Club has been right on the mark with their musical productions this season, and Altar Boyz is no exception.  Previews began tonight and continue until opening night on June 24th.

I wasn’t familiar with the show before tonight but was quickly taken in by the clever spoofing of boy bands and Christian music. The plot does play a little thin at times but the enthusiastic audience was far too busy laughing to notice.

Matthew (Jeremy Crittenden), Mark (David Hurwitz), Luke (Jak Barradell), Juan (Vincent Tong), and Abraham (Geoff Stevens) dance and sing as a well-oiled machine with a mission to save souls.  Commanded by the Lord to gel their hair with product and gird their loins with pleather lest they skew to the detestable older demographic, the Altar Boyz are on the final show of their “Raise the Praise” concert tour.

The entire quintet of actors shines in each of their respective roles as teen heartthrobs, but I have to single out Tong for his acrobatics, both literal and vocal.  He was also extremely memorable last Christmas as LeFou in Beauty and the Beast (Arts Club).

I have to confess that I attended several boy band concerts in the late 90s, and I saw more than a few evocations of classic Backstreet Boys and *NSync steps on the Granville Island stage tonight.

Some of the lines delivered could use a little tightening, but the preview performance was divine and hopefully I’ll be back after the opening to see how the show improves.  It’s looking like Director Bill Millerd is going to have yet another hit on his hands.

Running at 90 minutes with no intermission, Altar Boyz runs until August 1st at the Granville Island Stage (1585 Johnston Street).