I’ve seen many productions of Joseph and the Amazing Technicolor Dreamcoat over the years; the good, the bad, and the ugly.  Footlight Theatre’s production falls somewhere comfortably in the middle.

With music by Andrew Lloyd Webber and lyrics by Tim Rice, the family-friendly tuner has become extremely popular with community and school theatre groups.  Vancouver is apparently not immune to these charms, as this is the first of three Josephs gracing local stages over the coming year.

Based on the Old Testament story, the musical follows dreamer Joseph and his brothers using various styles of music including French ballads, country, calypso and disco.

Danny Balkwill (Thoroughly Modern Millie, TUTS) as Joseph has a pop voice well-suited to the title role.  He mostly used his instrument to good effect, although in parts his riffing seemed excessive.

Bree Greig as the Narrator was off to an auspicious beginning in her Vancouver musical-theatre debut.  Her voice has a clear bell-like quality and she carried herself well amongst the large ensemble.

David Kemper’s Potiphar was a scene-stealer in his brief appearance and Brad Strelau’s Pharaoh was a credit to cheesy Elvis impersonators everywhere.

The children’s chorus sang earnestly under the capable direction of Elaine Lindbjerg and was absolutely precious.  Several young stars-in-the making were readily apparent during the children’s solo performances.

Joseph and the Amazing Technicolor Dreamcoat is almost completely sung-through, and it can be difficult for some less-seasoned actors to properly define and develop their characters with little to no spoken dialogue.  This ensemble repeatedly fell into that trap and would have benefited from some stronger direction as to acting while singing.

This is Footlight’s first time in the larger 600-seat Michael J. Fox Theatre, which is double the audience space of their past venues.  Director Lalainia Lindbjerg-Strelau’s Joseph has set them off to a respectable start for what will hopefully be more successful shows down the road.

Joseph and the Amazing Technicolor Dreamcoat, presented by Footlight Theatre Company, plays until November 14, 2009, at the Michael J. Fox Theatre, 7373 MacPherson Ave, Burnaby.  Tickets are available online or by phone at 604-684-2787.

Vancouver will soon be host to not one, but two versions of Evil Dead at the end of October.  One company was granted the professional rights, the other the amateur rights.

I’ve been scouring the web, trying to see if there is a term for when there are two productions of the same show playing in the same city.  So far, I’ve got nothing.  Perhaps somebody out there can help me out? 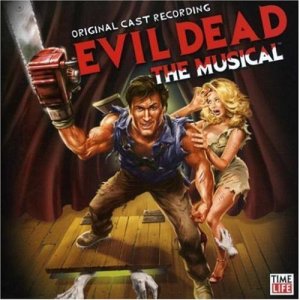 In a relatively smaller market like Vancouver, it must be a challenge enough to compete for ticket-buying audiences when two versions of the same play or musical are staged in the same year or season.  That being said, it seems to happen with a fair bit of regularity.  Thoroughly Modern Millie played at TUTS this summer and will play again this fall at Gateway.  Joseph and the Amazing Technicolor Dreamcoat is being done by Footlight this November, then again by Royal City Musical Theatre in the spring and then for a third time by TUTS next summer.  Maybe they all know something that I don’t.

The dual Evil Dead productions are in a particularly precarious position, as one is opening just a little bit more than a week before the other and there is considerable overlap between their production dates.

I’ve heard buzz around both productions and murmurs over which show will be better or which one should local audiences support.  For my part, I’m exercising some journalistic impartiality, giving equal coverage to both shows on this site. I’m also urging local musical aficionados to see both productions, if they can.

There are likely to be upsides and downsides to both (as with every show) and this site will provide reviews of both productions after their respective opening nights.