From the innovative company that brought A New Brain to Vancouver last year comes the Tony Award-winning musical NINE.  NINE follows the story of Italian film director Guido Contini as he struggles to create his next movie while dealing with the women in his chaotic personal and professional lives. 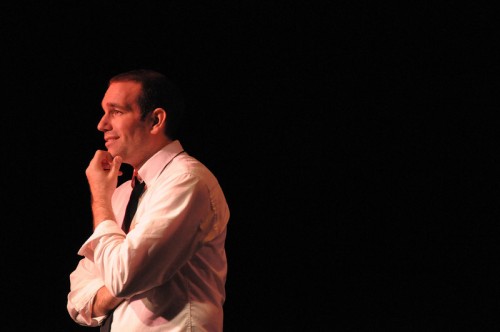 In a total surprise (at least to me), Vancouver actor Andrew Cohen was one of the first eliminated from the top 12 on Monday night’s episode of CBC’s Triple Sensation.

After being coached by the likes of Stratford Director/Choreographer Donna Feore and celebrity Acting Coach Patsy Rodenburg, Cohen and Wylmari Myburgh were the first to leave the competition.

Judging based solely on editing and who was heavily featured on last night’s show, it seems that Glen Mills, David Light and Leah Cogan are the favourites to win.  Light was an early standout, and Mill’s emotional performance of “Soliloquy” (Carousel)  made him a powerful contender.   However, Cogan’s top ranking both at midpoint and at the episode’s conclusion, puzzled me. 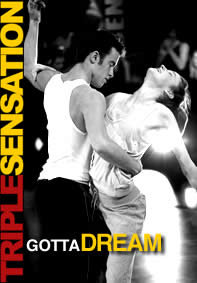 Cogan is clearly talented, but whenever a coach/judge pointed out something masterful that she had accomplished, I didn’t see it.  Perhaps it can be chalked up to something lost in translation between live in person to television.  I found so many of the other performers to be far more compelling, albeit in heavily-edited minute-long clips.

That leaves only Burnaby resident Alyssa Brizzi representing BC in the run for the $150,000 first prize scholarship and the Triple Sensation title.

Cohen has already moved on from the experience having recently starred as leading man Gordon in A New Brain (Pipedream) and is currently studying at UBC in the BFA acting program.

Master class continues on Triple Sensation next week in part four of six, Mondays on CBC, through July 27th.

Triple Sensation made its way to Vancouver for the Western Canada auditions in its second episode on Monday night.  Last week, I said I’d be keeping an eye out for any familiar faces.

I was struck with déjà vu not once, but twice, by two of the featured auditioners.  Georgia Swinton and Andrew Cohen, who both recently impressed in A New Brain (Pipedream Theatre), were among forty hopefuls trying out for six spots.

Swinton was critiqued for her performance of “Don’t Rain on My Parade” (Funny Girl) by the judging panel.  Composer Marvin Hamlisch (A Chorus Line) arbitrarily panned her song choice and suggested something funnier would have been better suited.  Swinton does have ample comedic charms as evidenced in A New Brain, and will hopefully soon have a chance to show off her range to Vancouver audiences in future roles.

A New Brain’s leading man Cohen sang a stirring rendition of “The Old Red Hills of Home” (Parade).   His strong vocals, along with his monologue and dance audition, landed him one of the six Vancouver spots in the finals.

Next week the Vancouver and Toronto top sixes join in a master class session, a kind of theatrical boot camp.

William Finn and James Lapine’s A New Brain ranks highly in my musical theatre playlist and Pipedream Theatre’s production more than lives up to expectations in its Vancouver premiere.

Save for a spattering of inaudible lyrics lost to upstage singing and some occasional overly-loud piano, Tuesday’s preview of A New Brain went off with few hitches.

It’s Finn’s semi-autobiographical story of a song-writer, Gordon Schwinn, who is hospitalized with a life-threatening illness and faces the possibility of not being able to finish the songs he dreams of writing.

Andrew Cohen more than holds his own as the lead Gordon, amid a very strong ensemble cast.  Cohen and Tyson Coady, as his lover, Roger, score some tender romantic moments in both “Just Go” and the reprise of “Sailing.”

Georgia Swinton playing multiple roles as an overly-familiar waitress and as nurse Nancy D. is a delight to watch.

Sabrina Prada as Gordon’s mother Mimi, is a stand-out, and neatly steals the spotlight in the tail half with “Throw It Out” and “Music Still Plays On.”  I can’t wait to see her again soon in more Vancouver productions.

William Finn’s score shines best in the ensemble numbers and choreographer Keri Minty (who I last saw this spring as Sheila in Royal City’s A Chorus Line) really makes the most of them in a balancing act of cohesiveness and controlled chaos.

A New Brain, presented by Pipe Dream Theatre Project, previews tonight, June 16th, at Performance Works on Granville Island.   The musical by William Finn (The 25th Annual Putnam County Spelling Bee, Falsettos) and James Lapine (Sunday in the Park with George, Into The Woods) is making its Vancouver debut and runs through June 21st.

I haven’t blogged in almost a year and I’m planning on making this launch as easy as possible.  I’d hoped to be able to cover Monday night’s Jessie Awards, but I’m still a little behind schedule.  This coming week, however, there are three shows that I’m planning to see and review.

You can look forward to more posts and notes about these shows as the week progresses.

I have high hopes for what this week of summer Vancouver musical theatre has to offer.