Forbidden Broadway, the popular musical-theatre parody, returns to Metro Vancouver this week.  For one week only, Fighting Chance Productions presents a best of version of Forbidden Broadway to Langley audiences, poking good-natured fun at shows like Wicked, Les Misérables, Mamma Mia, Hairspray, and The Phantom of the Opera. 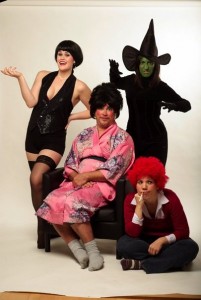 Running different productions of the same musical within a relatively short period of time inevitably invites comparisons, for better or for worse.  Having seen the TUTS production of Millie half a dozen times this past summer, I’m familiar with both the strengths and the weaknesses of the book and score.  I had such high hopes for Gateway Theatre’s production of Thoroughly Modern Millie. On paper it shows so much promise, but ultimately falls short.

There is a lot to like about this production.  Choreographer Kennith Overbey has charged the dance numbers with an intense energy that truly carries the show.  The freneticism of the love-wearied office pool as they tap out their frustrations in “Forget About the Boy,” was almost enough to make me forget some of the other flaws in this show.

Overbey makes excellent use of the incredibly strong male and female choruses.  Among the standouts are Georgia Swinton, Damon Jang, Dimitrios Stephanoy, Meagan Ekelund and Doran Satanove.  There is more than a hint of sex appeal in the alcohol-infused “The Nutty Cracker Suite,” which in less capable hands could have easily been boring and hackneyed.  That same rawness is also welcomely present in the male chorus in “Long as I’m Here with You.”

The ten-piece orchestra is at the top of its game and brings the jazzy score to life, with what seems like minimal effort.  Musical theatre companies around town should take note: cutting back on the size of pit orchestras and live accompaniment can exact a heavy toll on your show.  That richness of sound can’t be replicated by other means.

Lauren Bowler (The Producers, Arts Club) is a strong actress and singer, but doesn’t come off as terribly likeable in the title role of Millie Dillmount.  Her characterisation played like it was from a more serious show, not the one she was in.

Denis Simpson plays wealthy socialite and songstress Muzzy Van Hossmere in what appears to be incredibly bad whiteface.  I was hoping for something special in Simpson’s two musical performances “Only in New York” and “Long as I’m Here with You,” and I was still waiting when the final curtain fell.  The fault doesn’t lie with Simpson, but with the uninspired staging consisting of simply facing the audience head-on with limited movement and singing, à la high school.

I’ve seen Simpson dance and sing enough times to know that this wasn’t a case of a director staging around a performer’s weak spots.  Whatever the reasoning behind this creative decision, the poor direction in these numbers pulled down the show’s energy.

The same barebones approach to staging also hurt the comedic number “They Don’t Know.” As the villainous Mrs. Meers, Irene Karas’ accent careered perilously close to the edge and her dragon lady was missing some needed bluster.

Mat Baker’s vocals and dancing were well-suited to the role of Jimmy Smith, but was otherwise bland and not particularly charismatic.  On the other hand, Gaelan Beatty was perfectly charming as the somewhat pompous Trevor Graydon.

Jen Darbellay’s costumes are colourful and eye-catching, though a bit more variety would have been welcome.  The scale of Drew Facey’s set properly conveys the height of the New York cityscape without dwarfing the actors.

All of the technical elements are there, but the show lacks heart.  It should be full of humour and fun, but the quick pace of this staging seems to gloss over many of the best lines and scenes.  That being said, the energetic choreography, top-notch orchestra, and strong chorus alone make Thoroughly Modern Millie worth the price of admission.

Gateway Theatre presents Thoroughly Modern Millie until January 3, 2010 at the Gateway Theatre, 6500 Gilbert Road, Richmond.  Tickets are available online or by phone at 604-270-1812.

Triple Sensation made its way to Vancouver for the Western Canada auditions in its second episode on Monday night.  Last week, I said I’d be keeping an eye out for any familiar faces.

I was struck with déjà vu not once, but twice, by two of the featured auditioners.  Georgia Swinton and Andrew Cohen, who both recently impressed in A New Brain (Pipedream Theatre), were among forty hopefuls trying out for six spots.

Swinton was critiqued for her performance of “Don’t Rain on My Parade” (Funny Girl) by the judging panel.  Composer Marvin Hamlisch (A Chorus Line) arbitrarily panned her song choice and suggested something funnier would have been better suited.  Swinton does have ample comedic charms as evidenced in A New Brain, and will hopefully soon have a chance to show off her range to Vancouver audiences in future roles.

A New Brain’s leading man Cohen sang a stirring rendition of “The Old Red Hills of Home” (Parade).   His strong vocals, along with his monologue and dance audition, landed him one of the six Vancouver spots in the finals.

Next week the Vancouver and Toronto top sixes join in a master class session, a kind of theatrical boot camp.

William Finn and James Lapine’s A New Brain ranks highly in my musical theatre playlist and Pipedream Theatre’s production more than lives up to expectations in its Vancouver premiere.

Save for a spattering of inaudible lyrics lost to upstage singing and some occasional overly-loud piano, Tuesday’s preview of A New Brain went off with few hitches.

It’s Finn’s semi-autobiographical story of a song-writer, Gordon Schwinn, who is hospitalized with a life-threatening illness and faces the possibility of not being able to finish the songs he dreams of writing.

Andrew Cohen more than holds his own as the lead Gordon, amid a very strong ensemble cast.  Cohen and Tyson Coady, as his lover, Roger, score some tender romantic moments in both “Just Go” and the reprise of “Sailing.”

Georgia Swinton playing multiple roles as an overly-familiar waitress and as nurse Nancy D. is a delight to watch.

Sabrina Prada as Gordon’s mother Mimi, is a stand-out, and neatly steals the spotlight in the tail half with “Throw It Out” and “Music Still Plays On.”  I can’t wait to see her again soon in more Vancouver productions.

William Finn’s score shines best in the ensemble numbers and choreographer Keri Minty (who I last saw this spring as Sheila in Royal City’s A Chorus Line) really makes the most of them in a balancing act of cohesiveness and controlled chaos.