What About LUV?; Down Stage Right (Review)

After a steady diet of familiar musical-theatre staples, it’s a welcome change of pace to see some lesser-known shows make their way on to the Vancouver stage.  What About LUV?, presented by Down Stage Right Productions, more than fits the bill.  The show reunites director Mark Carter , actors Scott Walters and Meghan Gardiner and much of the behind-the-scenes team from last year’s DSR production of Evil Dead: The Musical.

Neil Minor, Meghan Gardiner and Scott Walters in Down Stage Right's What About LUV?

Actors Neil Minor, Walters and Gardiner do a bang-up job in this musical adaptation of the successful Tony-winning 1964 Broadway play LUV.  The trio play neurotic and whiny New Yorkers who at various points informally vie to see which among them is the most miserable.

All of the action is set on a New York City bridge and begins when Milt (Minor) stops Harry (Walters) from killing himself after a serendipitous reunion.  The two former classmates end up tangled in a convoluted love triangle with Milt’s wife (Gardiner).  Gardiner really shines as the uptight Ellen.

What About LUV?, at times, is smart and bitingly funny.  The actors take turns being paired off in a series of musical duets and straight acting scenes, and each takes their fair share of the spotlight to showcase their respective talents.

Much of the comedy is silly in the vein of Jerry Lewis and Walters takes to it like a neurotic fish to water.  Walters’ facial contortions and his scenes with his brown paper bag alone are worth the price of admission.

The first act started a bit slow and it took a while to warm to the show’s concept.  The second act, which picks up one year after the first, is much stronger.

Choreographer Ken Overbey has filled the show with a series of inspired little moments that left the audience smiling.  John Bessette’s set is simple but effective.

Kudos to light designer Darren Hales for his artful use of lighting.  I’ve said before that I usually only notice lighting when it’s done wrong, but here I took notice several times because it was done so well.

The beauty of What About LUV? is in its simplicity. All of its elements come together into a neatly-wrapped quirky gem of a show.  This is definitely a must-see.

What About LUV?, presented by Down Stage Right Productions, runs until November 13 at the Waterfront Theatre, 1412 Cartwright St., Granville Island.  Tickets are available online or at the door.

Posted in Down Stage Right, Musical Theatre, Reviews, Vancouver, What About LUV?

What About LUV?; Down Stage Right (Upcoming show)

Down Stage Right Productions celebrates its twentieth anniversary with the Vancouver premiere of What About LUV?  What About LUV? is a hilarious twist on a love triangle gone horribly awry. 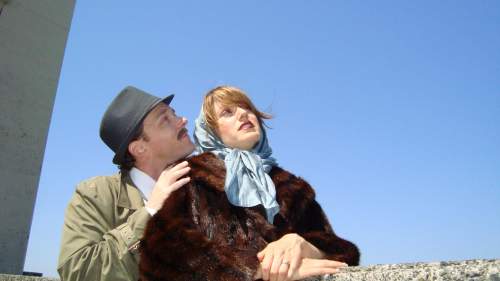 Neil Minor and Meghan Gardiner in Down Stage Right's What About LUV?

Down Stage Right Productions presents What About LUV? from November 3 – 13 at the Waterfront Theatre, 1412 Cartwright St., Granville Island.  Tickets are available online or at the door.

Posted in Down Stage Right, Musical Theatre, Upcoming Shows, Vancouver, What About LUV?

Theatre Under the Stars brings the adapted version of the 1952 film classic Singin’ in the Rain to the Vancouver stage.

Neil Minor, Lindsay Sterk, and Lauren Bowler in the TUTS production of Singin' in the Rain.

Theatre Under the Stars presents Singin’ in the Rain on alternating nights from July 10 – August 21, 2010 at the Malkin Bowl in Stanley Park, Vancouver. This year, all seats are reserved, eliminating the need to line up early. Tickets are available online or by calling 1-877-840-0457.

Posted in Musical Theatre, Singin' in the Rain, Theatre Under the Stars, Upcoming Shows, Vancouver