Theatre Under the Stars brings the adapted version of the 1952 film classic Singin’ in the Rain to the Vancouver stage. 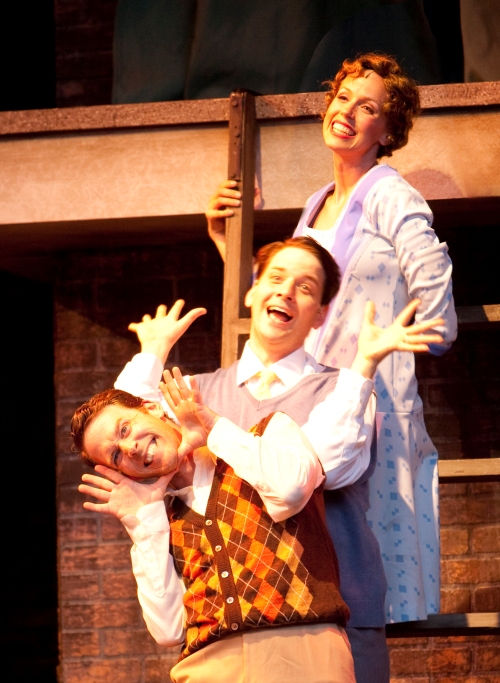 Neil Minor, Lindsay Sterk, and Lauren Bowler in the TUTS production of Singin' in the Rain.

Theatre Under the Stars presents Singin’ in the Rain on alternating nights from July 10 – August 21, 2010 at the Malkin Bowl in Stanley Park, Vancouver. This year, all seats are reserved, eliminating the need to line up early. Tickets are available online or by calling 1-877-840-0457.

Posted in Musical Theatre, Singin' in the Rain, Theatre Under the Stars, Upcoming Shows, Vancouver

The third and final production of Joseph and the Amazing Technicolor Dreamcoat to hit Metro Vancouver this season, comes courtesy of Theatre Under the Stars. 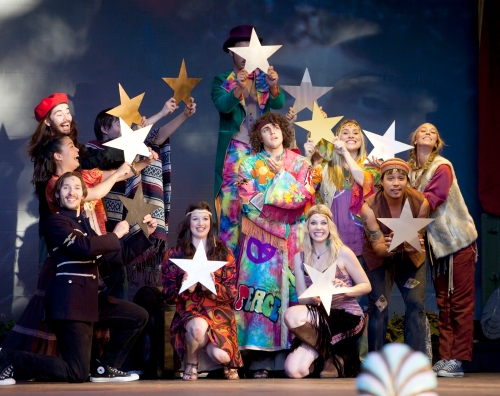 The cast of TUTS' Joseph and the Amazing Technicolor Dreamcot

Theatre Under the Stars presents Joseph and the Amazing Technicolor Dreamcoat on alternating nights from July 9 – August 20, 2010 at the Malkin Bowl in Stanley Park, Vancouver.  This year, all seats are reserved, eliminating the need to line up early. Tickets are available online or by calling 1-877-840-0457.

Thoroughly Modern Millie is Theatre Under the Stars’ second offering this summer, and what a show!  Adapted from the 1967 musical film of the same name which starred Julie Andrews, Mary Tyler Moore and Carol Channing, the 2002 stage version won the Tony Award for Best Musical.

The book is by Richard Morris (the original 1967 screenwriter) and Dick Scanlan.  The stage musical borrows some of its score from the movie as well as from Tchaikovsky, Al Jolson, Victor Herbert, and Gilbert & Sullivan’s Ruddigore.  The new music is by Jeanine Tesori (Caroline, or Change, Shrek the Musical) and new lyrics are by Dick Scanlan.

Set in New York City in 1922, it’s the story of a small-town Kansas girl Millie Dilmount who’s afraid to end up “old and grey at 29.” She comes to the big city to seek her fortune in the modern way; she wants to marry her future boss. Millie is enthusiastically played by local actor Diana Kaarina, who not that long ago returned from Broadway (Rent, Les Misérables) and touring productions in the US (Thoroughly Modern Millie). 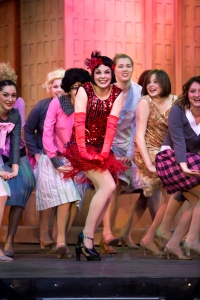 Kaarina is definitely a triple threat and she owns the role, singing, tapping, and acting her heart out.  The opening number “Not For The Life of Me/Thoroughly Modern Millie” crackles with energy and choreographer Shelley Stewart Hunt’s choreography really spotlights the talented cast.

I’ve been enamoured with Meghan Anderssen since she stole the show last year as Annie Oakley at TUTS.  This summer she plays the aspiring actress Miss Dorothy Brown and once again she tries to steal the show at every turn.  And if not for the incredibly strong cast of leads, she undoubtedly would have succeeded.

Anderssen’s comic timing is perfection in everything that she does.  Her introductory duet with Kaarina, “How the Other Half Lives,” has some great moments between the pair.  To her credit, Anderssen has chemistry with all of the actors she is paired with over the evening.

Seth Drabinsky, who wowed local audiences a few years back in Hedwig and the Angry Inch (Pickled Productions), makes his TUTS debut as Millie’s tightly-wound boss Trevor Graydon.  Drabinsky displays his operatic training in a masterful quick-tongued homage to the Gilbert & Sullivan patter song with “The Speed Test.”  He and Anderssen deftly show off their joint romantic and comedic chops in “Ah Sweet Mystery of Life” and “Falling in Love.”

Composer Tesori’s new score falters a bit with her songs for Millie’s love interest Jimmy Smith.  “What Do I Need With Love” and “I Turned The Corner” are largely forgettable as performed by the woefully miscast Danny Balkwill.  Balkwill lacks the easy charm and onstage charisma necessary to win over the audience.

Sarah Rodgers returns to the musical stage after a prolonged absence and gleefully relishes in the character part of Mrs. Meers.  As the failed-actress turned white-slave trader, she does a bang-up job of self-promoting herself as a star in “They Don’t Know.”

Mrs Meers spends the entire show hiding in yellow-face and sporting an atrociously terrible accent, masquerading as the Chinese matron of the Priscilla Hotel. The original 1967 film cast Asians in the roles of the villainous henchmen in a less-than-subtle display of racist stereotyping.  When the musical was adapted for the stage in 2002, the henchmen were changed into Mrs. Meers’ unwilling accomplices.

The characters Ching Ho and Bun Foo, played by Aaron Lau and DaeYoung Danny Kim, are the only ones who have a clue about what’s actually going at the Priscilla Hotel.  But they’re unable to warn anyone since they only speak (and sing) in Chinese.  Through the clever use of subtitled laundry, the audience is able to understand the dialogue.  Lau and Kim do a great version of Jolson’s “Mammy” redone in Chinese as “Muquin.”

Nancy Herb certainly has the right sultry nightclub sound for socialite Muzzy Van Hossmere, and vocally I have no complaints about her.  But I wanted so much more from her that just wasn’t anywhere to be found.  I’ve always seen Muzzy as sassy, campy and a bit of a diva.  The role has previously been played by Carol Channing, Sheryl Lee Ralph and Leslie Uggams, all of whom made the role their own, essentially by playing themselves.  Even though she has two starring numbers in the show, “Only in New York” and “Long As I’m Here With You,” Herb faded into the background.  I’d love to see her bring some attitude and life into the character.

Chris Sinosich’s costumes are modern and jazzy and I loved her take on Muzzy Van Hossmere’s over-the-top nightclub get-ups.

Kaarina opens the second act strongly with the powerhouse “Forget About The Boy” and the resulting extravaganza of romantically frustrated tap-dancing office workers is pure satisfaction.

Music Director Christopher King’s orchestra is near-perfect and the music is definitely what makes the show shine in the wide open spaces of the Malkin Bowl. The bright resounding tones of the brass especially give the beautiful score its vintage happy-go-lucky feel.

Shel Piercy’s directions are always top-notch and this is no exception.  Thoroughly Modern Millie’s cast is thoroughly bursting with talent and it’s a sensational must-see for the summer.  I already can’t wait to see it again.  Tickets are still available through Tickets Tonight. Thoroughly Modern Millie plays every other night at the Malkin Bowl in Stanley Park at 8 pm until August 22nd.

Theatre Under the Stars: Summer of ’09

July is already upon us, which means that it’s only a little over a week before Theatre Under the Stars begins previews of its 2009 season.

TUTS has made some shrewd choices this year with a duo of family-friendly shows; classic crowd-pleaser Annie and the relatively new but very popular Thoroughly Modern Millie.  I’ll be posting further about both shows in the days leading up to the opening nights.

TUTS has been a summer Vancouver tradition at the Malkin Bowl in Stanley Park since the 1940s with only a few interruptions.  Most recently TUTS took a hiatus in 2006 after running into financial difficulties.  It was widely speculated that the two lesser-known shows staged in 2005, Big: the musical and Can-Can, failed to draw in ticket-buying audiences.

For the last two years, TUTS has safely steered towards popular and time-tested fare; Grease and Oklahoma in 2007, and Jesus Christ Superstar and Annie Get Your Gun in 2008. 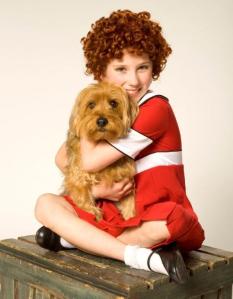 Michelle Creber and Max in the TUTS production Annie. Photo by Tim Matheson.

Thoroughly Modern Millie stars Broadway actress Diana Kaarina (Rent, Les Misérables) as the titular character who, in the modern tradition, moves to the big city with plans to marry not for love but for money.  The role should be somewhat old hat for Kaarina, as she previously played the role in the touring company of Millie.  Directed by Shel Piercy, the cast also includes Meghan Anderssen (Annie Get Your Gun, TUTS), Danny Balkwill (We Will Rock You, Mirvish), and Sarah Rodgers.